DONATE - HELP US THROUGH COVID 19

Why J.K. Rowling is Wrong

This week, an article was published about how we need to create a more equal world for people who menstruate. It highlighted issues worsened by COVID-19 and how more people than ever are struggling to get hold of essential sanitary supplies. Sounds great, right? How could anyone have an issue with that?

Well. Enter J.K. Rowling, who tweeted the article with the following comment: 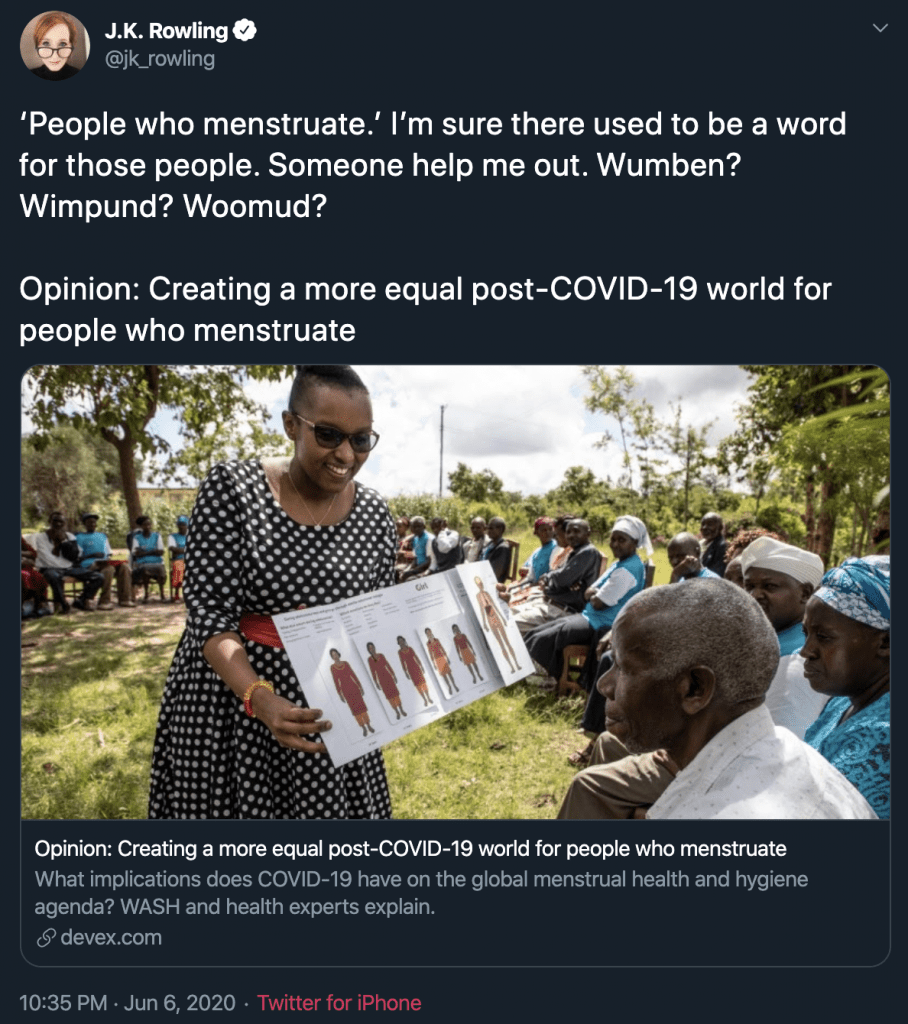 Rowling has received huge backlash for what she said, but unfortunately it’s also stirred up some very ugly and transphobic responses. She also tweeted about how the phrase ‘people who menstruate’ reduces the validity of same sex couples (absolutely mindblowing).

I just want to talk about why what she said is wrong without starting any arguments or adding any more hateful discourse to the conversation. So grab a cuppa (gin), we’re going to talk about two things – why having periods does not define women, and why what Rowling said is transphobic. I’m going to break this down as simply as I can and explain terminology along the way.

Women are more than a functioning uterus.

At the heart of the argument is this; being a woman is not identified by having periods. A woman who does not have periods is not any less of a woman – whether it’s pre/post-menopause, hormonal, caused by a medical condition, a result of having an IUD, or absolutely anything else.

Something that came up in her follow up tweets was: “My life has been shaped by being female. I do not believe it’s hateful to say so”.

It’s not hateful to say so – it’s hateful to suggest that being female is SO INTRINSICALLY LINKED with menstruating that anyone who doesn’t menstruate isn’t female. A lot of cis (those who identify as the biological gender they were assigned at birth, like Rowling) women do not have periods, and that does not, at all, under any circumstances whatsoever, impact whether or not they are women.

Reducing the female experience just to someone who has periods is just a shitty thing to do. Imagine if we identified men as ‘people who make sperm’?! I for one am looking forward to the day that I never have to have a period again. There is so much that she could say about the female experience, but this is not it.

If you wanted to go further, there have been (and still are) places and cultures that define a child as being a woman when menstruation starts, which can be dangerous. 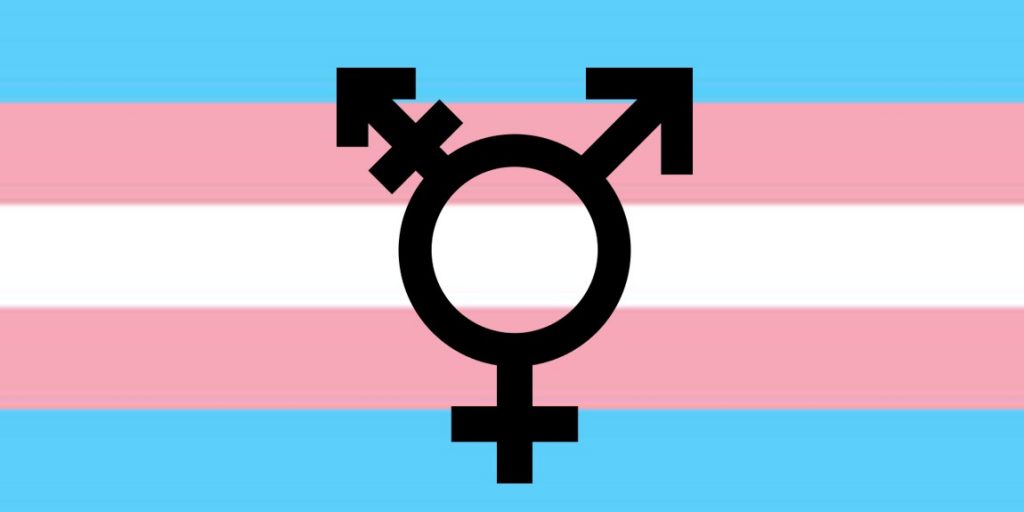 The other issue with what Rowling said is that it is inherently transphobic. Following on from the first point above, to say that having a period is a women-only thing, you’re excluding trans and non-binary people.

For clarity – a trans man is someone who was born biologically female, but identifies as a man. A trans woman is someone who was born biologically male, but identifies as a woman. Trans people can take steps that can help them physically change gender, from hormone treatments to surgery, however, whether they do or not is entirely up to them, and does not negate what they identify as. With this, trans people can have whatever genitals they goddamn like and it does not matter one bit. If you’re still unsure, try to separate the idea that sex and gender are the same thing.

Trans men, who are men, can have periods.

Earlier this year I had the pleasure of meeting Sheila from Chrysalis Gender Identity Matters, who The Homeless Period Southampton will hopefully be supplying with donations after the lockdown. Sheila and I were discussing how having a supply of sanitary products at their groups, offices and other spaces can save trans men from having a potentially emotionally difficult or embarrassing experience of buying period supplies. These men should have the same easy access to sanitary products as the rest of us, without feeling that they’re any less of a man because of the idea that having periods is only for women.

Trans women, who are women, might not have periods.

Again linking to the root of the issue above, a trans woman doesn’t have to have a period to ‘be allowed’ to identify as a woman. Those women are women, and are not any less of a woman than cis women like Rowling.

Some people are non-binary.

This means that they do not identify as either male or female. They might be somewhere in-between, or they might be outside of the binary spectrum altogether. Once again, it does not matter what they were physically born with at all. Non-binary people often use they/them pronouns (again for clarity, binary pronouns would be she/her for those identifying as female, and he/him for those identifying as male). Non-binary people can have periods, but that doesn’t make them women. Or they might not have periods, but that doesn’t make them men.

So to go back to Rowling’s original comment, ‘people who menstruate’ is inclusive, accurate and what we should all be trying to use. Saying ‘women’ as a replacement for people who menstruate is transphobic and misogynistic. It excludes trans and non-binary people, it reduces women to nothing more than having a functioning uterus.

Changing the way that we use language is not something that happens overnight, and it can feel uncomfortable at first. But every time we try to do better is a step forwards. 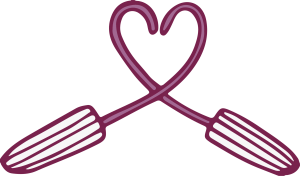 Harry Potter and the Philosopher's Allyship

A lot of us grew up with Harry Potter. It’s a real kick in the balls that Rowling can imagine a whole wizarding world but the notion that trans people exist is too much. I can’t imagine how it must feel for a trans Harry Potter fan to feel so excluded; this isn’t the first time she’s made transphobic comments either.

As a side note – is anyone else still annoyed that she uses the pseudonym Robert Galbraith for her other novels because she thought that no one wanted crime novels written by a woman!? Or that she called the only Asian character in Harry Potter CHO CHANG?! Or that she only revealed that Dumbledore was gay AFTER the last film was released, when she risked losing no money or interest in it? Or that there are ZERO same-sex couples in seven novels? Or that there’s like three black characters throughout? (I can actually only think of two off the top of my head…I’m being generous in assuming there’s a third somewhere). This woman is not an ally to anyone.

J.K. Rowling said a lot of things in her tweets yesterday alongside the first one, and I can’t go through it all step by step, but I hope that this explains some of the issues at hand.

However my inbox is always open for any questions or thoughts about these issues. You can email me at thehomelessperiodsouthampton@gmail.com, or send me a message on Facebook or Twitter. I’ll do my best to explain and help with any questions that you might have, or point you towards some resources for more information. I’m by no means an expert, but it’s not trans people’s responsibility to explain why they are valid to the rest of us.

Lastly, if you just so happen to be a privileged, wealthy, straight cis white woman who has 15 million Twitter followers, the very least you could do is to not be so needlessly cruel and hurtful to so many people. Everyone’s already going through a lot at the moment Joanne.

Opinion Piece: ‘Harry Potter’ Helped Me Come Out as Trans, But J.K. Rowling Disappointed Me.

The article that started it all: Creating a more equal post-COVID-19 world for people who menstruate

Things You Can Do for Transgender Equality

Tips for Allies of Trans People

I’m not going to give you a link to Rowling’s tweets because she sucks.

One thought on “Why J.K. Rowling is Wrong”